Tiger Cage is a trilogy of films made by Yuen Woo-ping between 1988 and 1991 which focus on the hard life of Hong Kong cops who solve criminal cases. Evidently, the famous director made many well-known martial ...
Written by AsianFilmFans


Tiger Cage is a trilogy of films made by Yuen Woo-ping between 1988 and 1991 which focus on the hard life of Hong Kong cops who solve criminal cases. Evidently, the famous director made many well-known martial arts flicks, including Iron Monkey (1993), Tai Chi Master (1994), and Wing Chun (1994), but the Tiger Cage movies are not mentioned very often. So, get your badges ready because we are about to bust a few bad guys. This is my retrospective editorial about the Tiger Cage Trilogy. 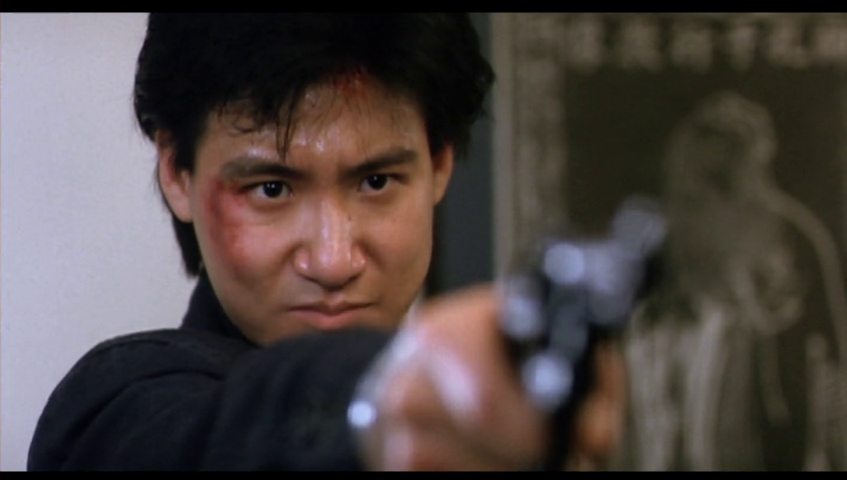 We bachelors really envy your true feelings. You're lucky, you're quitting tomorrow.

Officer Hsiu (Leung Kar-Yan) and his anti-narcotics team raid the smuggling den. In the ensuing chase, the policeman goes after a bad guy (Johnny Wang). The mobster is presumably shot dead, but he actually survives and takes his revenge on Hsiu by killing him. Shirley (Carol Cheng), who was about to marry Hsiu, finds it hard to get over the loss of her fiancé. She is consoled by Inspector Wong (Simon Yam). In the meantime, two officers, Fan Chun-yau (Jacky Cheung) and Terry (Donnie Yen) discover that their partner, Uncle Tat (Ng Man-Tat) actually cooperates with drug dealers. When they present the evidence to Inspector Wong, they unknowingly put themselves in danger…

The first movie is a hard-edged thriller with an excellent cast and explosive action. Indeed, action set pieces are exhilarating and Donnie Yen appears as the righteous cop. (Un)surprisingly his character is killed off early on in the picture, mostly due to the fact that he was not as popular back then as Jackie Cheung who is the real leading man. 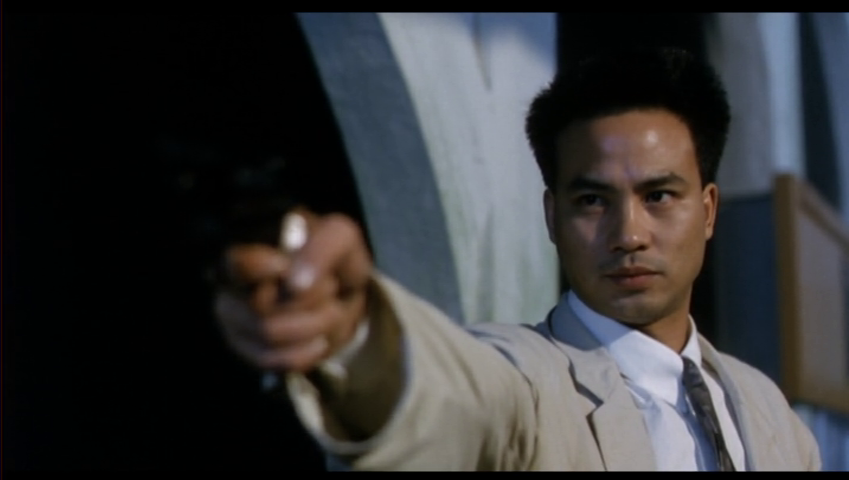 Great cast and excellent fight sequences are indeed the main advantages of Tiger Cage. It is a pleasure to see Donnie Yen facing off against Michael Woods and Jackie Cheung battling the intimidating Simon Yam. Interestingly, Carol Cheng (during pre-Her Fatal Ways days) shines in the film, in spite of having short screen time. Also, Ng Man-Tat has a lot of stuff to do in the movie, contrary to being just a comic relief as in his many other roles.

The only disadvantage of Tiger Cage, I would say, is the film’s tendency to crank up that level of uncomfortability to the max in certain scenes. For instance, the death sequence of the character played by the graceful Irene Wan is too harrowing and too out of the blue. In contrast, Uncle Tat is the story’s main punching bag but he survives every ordeal.

That being said, I admit that Tiger Cage is a pleasant viewing. If you like the cops vs. bandits spectacles , then I recommend the film. In addition, the 1980s vibes and suave Simon Yam as well as Jackie Cheung-on-the-edge are awesome bonuses. Gotta love classic Hong Kong action productions. 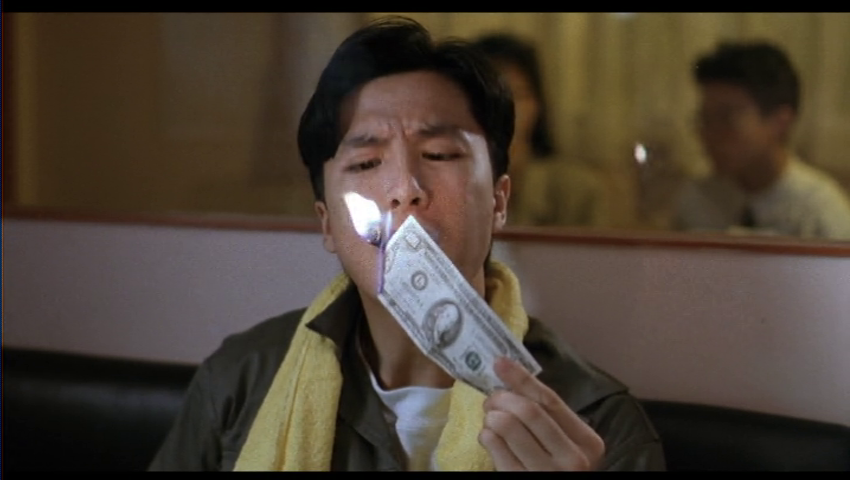 Do you even know where the Caribbean Sea is?

Director Yuen Woo-ping continues his series of dynamic thrillers about police officers with Tiger Cage 2, the movie that has absolutely nothing in common(!) with the original Tiger Cage apart from the title and a couple of returning actors. This “sequel in name only” is considered by many fans of Hong Kong cinema as the cult classic due to electrifying action set pieces and the presence of Donnie Yen as the male lead.

Mandy (Rosamund Kwan) is a lawyer at a prestigious company; however, she witnesses a brutal murder in the parking lot in the course of which a suitcase filled with money laundered by mobsters goes missing. The mobsters assume that Mandy may be in the possession of the money, so they go after her. Due to unexpected circumstances, the lawyer bumps into a hot-headed cop called Dragon (Donnie Yen). The two are framed for killing Mandy’s friend, Petty (Carol Cheng). As a result, Mandy and Dragon are on the run from the gangsters and the police. With the help of a fellow worker from the company, David (David Wu), the trio decides to find the money and clear their names.

Tiger Cage 2 is a film produced by the famous D&B company and basically made by the same team of filmmakers who cooked up In the Line of Duty 4 (1989). Donnie Yen finally takes over the wheel as a leading man in this film and we see him battle such popular “bad guys” as Michael Woods and John Salvitti. Even Cynthia Khan herself makes a small appearance as Inspector Yeung. Apart from one nice chase scene, she does not have much to do in this film, but one has to appreciate her wardrobe (the white outfit is so slick!) 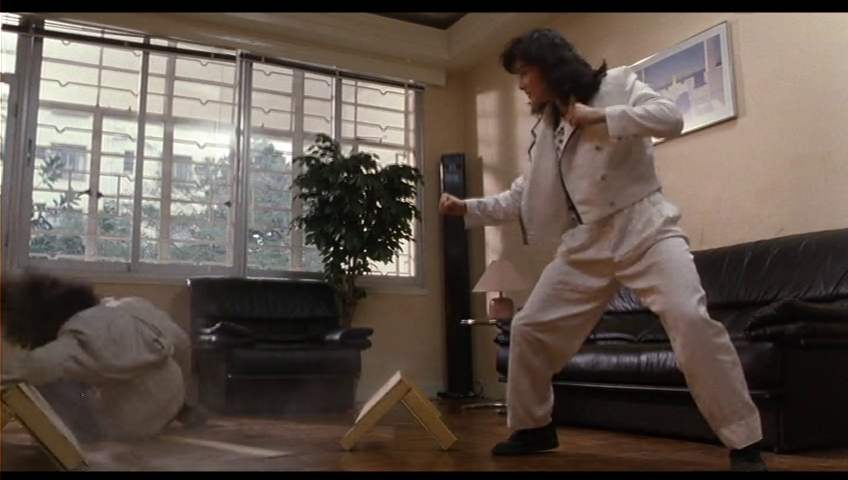 Yet, Cynthia Khan is not the only cutie who appears in Tiger Cage 2. Carol Cheng makes a surprise appearance as a love interest of the main villain, but she also has only two scenes to play in. The real heroine of this picture is the beautiful Rosamund Kwan who portrays a standard damsel in distress with a baggage of foreseeable clichés. Nevertheless, it is a joy to see Donnie save her skin time and time again.

With regard to action, Yuen Woo-ping really tried to push the envelope with this project. In comparison with the original film, the fights are much bolder and bigger. The sequences that stood out the most for me were the double-decker bus chase, Cynthia Khan vs. Leung Lam-Ling confrontation, and the epic sword fight between Donnie and John Salvitti. All of that coupled with synthwave-like music score by Richard Yuen amounts to a great viewing experience. 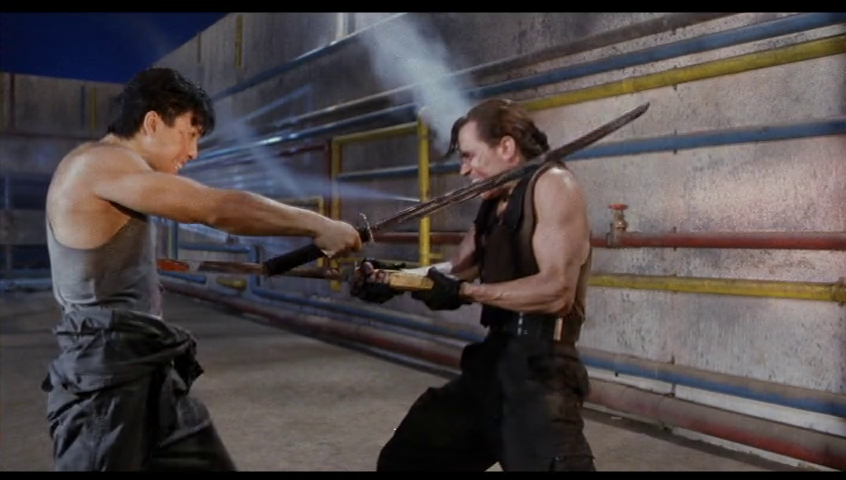 The only disadvantage of Tiger Cage 2 I can think of is a mediocre villain. Robin Shou is a very good actor, but he is no match for the charismatic Simon Yam who dominated the first movie. I think someone like Andy Lau or Tony Leung Ka-fai would have been a better choice.

If you like straightforward beat-em-ups, then I recommend Tiger Cage 2. In the Line of Duty 4 is a better cop film, in my opinion, but this one is also a fine effort from director Yuen Woo-ping. 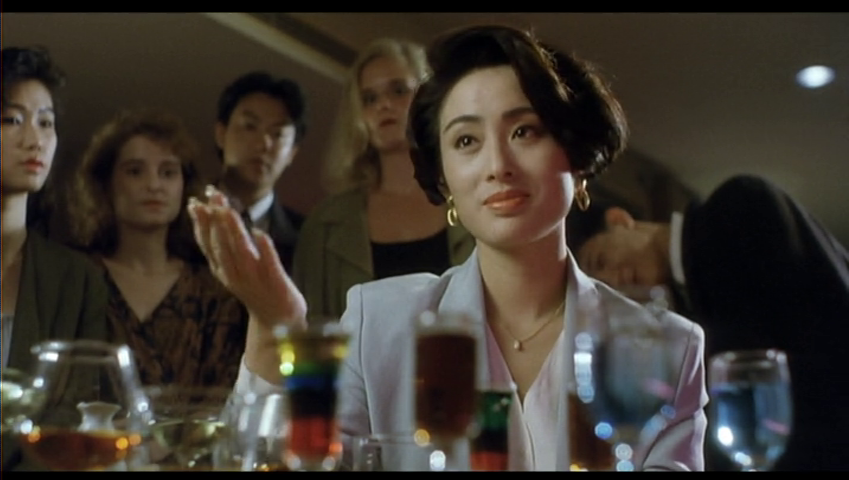 What have I done? In this world, whoever gets the money also gets the power!

The third part of Tiger Cage is also the final instalment of the action thriller trilogy. Interestingly, this particular movie is a sharp break away from the style set by the previous pictures. There is more emphasis on drama and economic espionage. Is Tiger Cage 3 a worthy conclusion of the saga about righteous police officers from Hong Kong? I could only wish…

Inspector James (Kwok Leung Cheung) and his colleague Inspector John (Michael Wong) are investigating a businessman called Lee Siu Bong (Kam-Kong Wong). Thanks to James’s girlfriend, Suki (Sharla Cheung), who works for Lee, the police officers obtain documents which incriminate the businessman. However, Lee Siu manages to get back the papers. He also kidnaps Suki and injures James. In the meantime, John is discharged from the force due to accusations of carrying out blackmail. The friends join forces in an attempt to get even with Lee. However, things do not appear to be as they are… 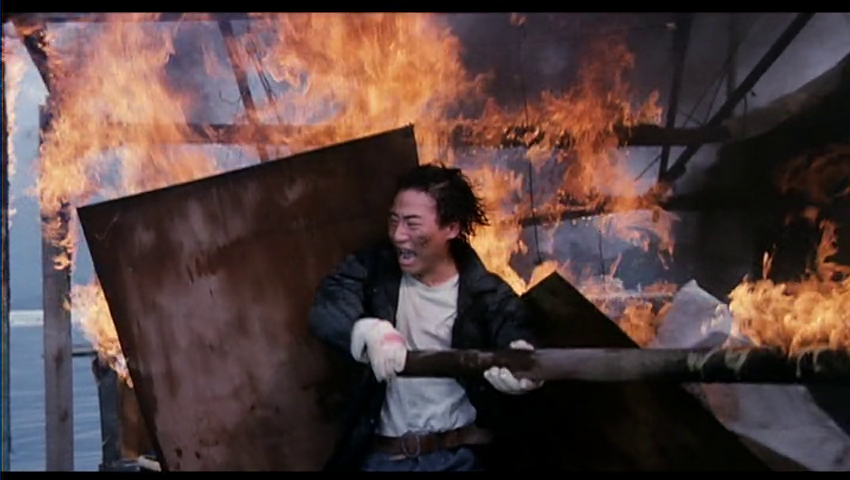 After seeing Tiger Cage 1& 2, I was hopeful that Yuen Woo-ping would deliver yet another action flick with well-made choreography and fast-paced fights. However, Tiger Cage 3 seems to be more like a mash-up between Sam Raimi’s Darkman (1990) and The Bold and The Beautiful (1987) soap opera. Seriously, the main protagonist, Inspector James, ends up getting disfigured by the bad guys due to possessing the documents of his sweetheart. What is more, the alliances between characters shift more frequently than Windows 10 updates. Towards the third act, you can get pretty confused in the maze of plot twists.

Nevertheless, if you are a fan of Sharla Cheung, then you will find her as the redeeming factor of this story. In fact, Tiger Cage 3 is all about Sharla and her sex appeal. In addition, each scene is an excuse to put her into a new 1980s dress. Honestly, I think that Sharla was doing a much better job with her charm in Stephen Chow’s comedies. 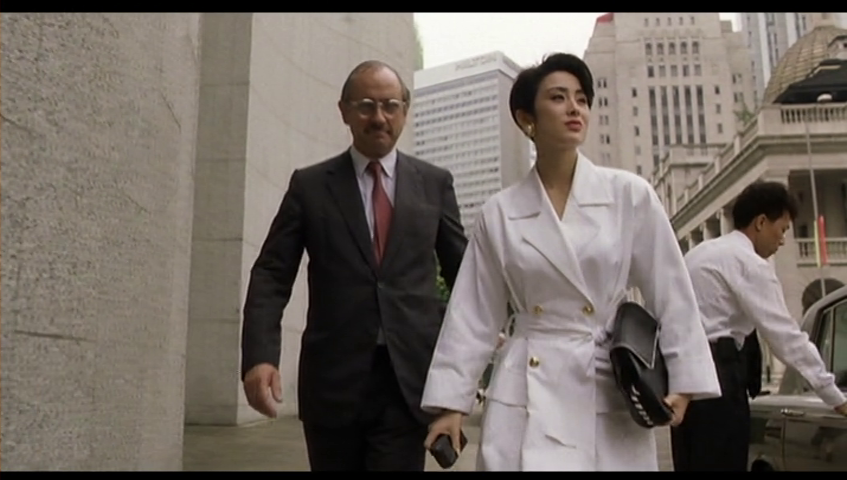 What about the action? Do not get your hopes up, because the fight sequences are scarce. The only confrontations worth noting are Kwok Leung Cheung vs. John Cheung showdown and the finale at a rooftop of a skyscraper. What is more, Michael Wong is criminally underused in this picture (Yet again, when counting his short appearance in Royal Warriors). Michael seems to be the only actor experienced enough to carry this movie, but the weak script brings everything down.

That being said, I enjoyed the picturesque panorama of Hong Kong. Tiger Cage 3 is one of the rare movies which show how awesome the city’s downtown area really is. This place is truly one of a kind. 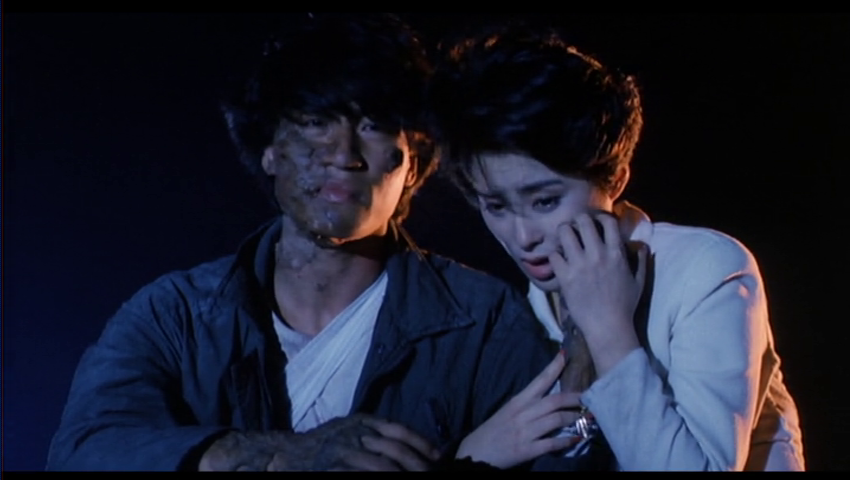 I recommend Tiger Cage 3 only for die-hard fans of Yuen Woo-ping. This movie is the only entry in the trilogy which was made without any solid idea. I guess Yuen must have really liked Darkman when it came out and he wanted to replicate those vigilante vibes.

This was my retrospective look at the Tiger Cage trilogy. What is your favourite part? Would you like to see Yuen Woo-ping doing a 4th movie? Please share your thoughts in the comments. Thank you for reading.

What's Lurking in the 'Shadows' of This New Hong Kong...