The Hardships of Making an Indie Film in Asia: Interview with Charles Garrett 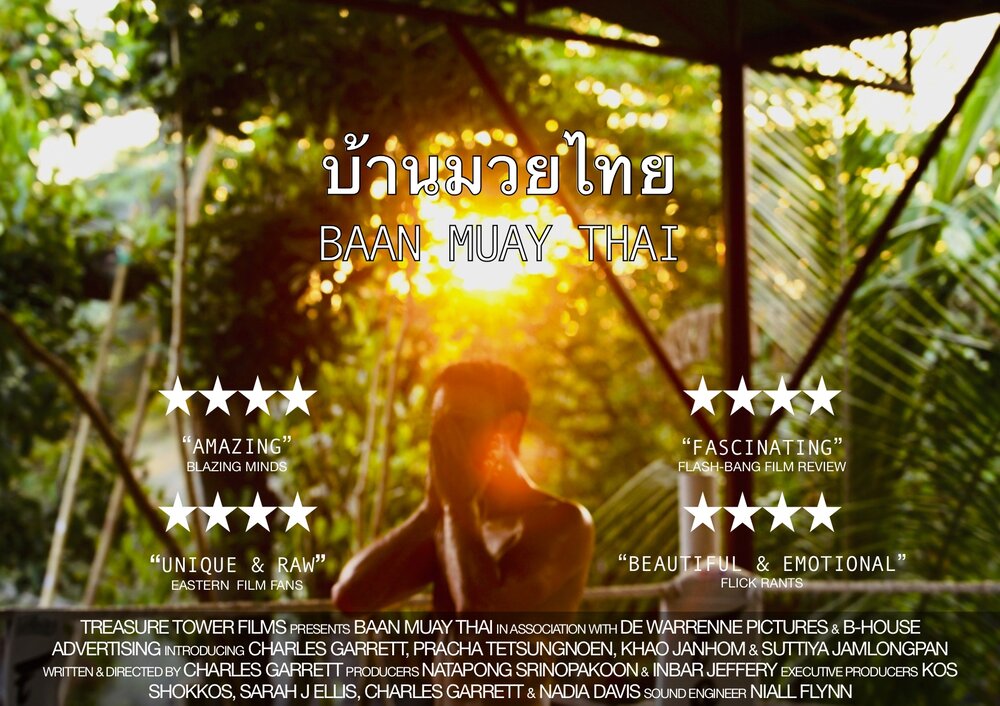 If you are an aspiring filmmaker, then be prepared to face a lot of obstacles in the course of making your motion picture. Oliver from Asian Film Fans sits down to talk with Charles Garrett, the director of an independent feature called Baan Muay Thai. The film tells the story of Max, a city trader, who, after an unexpected call from his trainer, leaves London to return to Thailand and help reopen his old Muay Thai camp. Read the full story about the difficult production that nearly lost 80% of the original footage:

What inspired you to make this movie? What was the initial idea?

The film was inspired by my time training Muay Thai at an army base in Nakhon Ratchasima. While I had no film background at the time (with the characters, stories and experiences) I remember at the time feeling as if I was living in a film.

The initial idea was to create a high-concept script, get a studio involved, and tag along for the ride as a producer.

Was there someone attached to directing? How did you end up making the picture on your own?

My producers wanted to complete finance before finally signing with a director. I wanted to have a director attached and begin developing the film; this was one of our early disagreements that grew over time.

After making the decision to leave my producers, I then decided to co-direct the film with my friend and camera operator. Initially, we were just thinking to shoot a pilot and see what happened, but we quickly grew in confidence that we could deliver the whole feature.

My mate/partner was on board for the UK unit as well as the pilot; although, he sadly got sick in Thailand and had to return after just a couple of months leaving me solo. I had no idea I would direct the film alone!

You mentioned previously that some high-profile executives from Hollywood were interested in the project. Could you tell us a bit more about this?

The producers were actually British, I met one at a film pitching event. I pitched the film and he liked it, we got talking after and I sent him the script. He had just won Best Picture at the Oscars the previous year, so it was quite exciting.

He put his name to financing the film, but his company only produced on significant budgets (over £3 million). While this was perfect for my initial plan, the same night I also met Gareth Edwards (the director of Monsters (2010), Godzilla (2014), Rogue One (2016)), who inspired me to go the low-budget route, similar to what he had done for Monsters.

Therefore, I continued to look for other producers capable of working at a lower budget level. I connected with the CEO of a mid-sized UK distribution company. They were also creating their own low-budget content.

I pitched them and they came on board - a team of 3 executives including a finance director and a legal director: a UK distribution deal, International sales deal, post-production deal + half the financing.

Yet again, this was another “dream deal” on the surface; however, things dragged out over time and they kept increasing the budget starting from £300 thousand ending up around £760 thousand.

During this time, a major UK studio pledged 50% but things did not work out. My producers wanted to own the rights to the story and I was not willing to give it up. I was also uncomfortable with how much the budget had increased as I did not feel it was adding to the production.

Within that financing, we had investors putting in significant amounts of money (over £200 thousand) and, therefore, wanting quite a lot of say in things.

There was another Oscar winning producer who offered to come on board, yet his involvement was conditional on a certain director being attached whom I did not think was suitable for the role so that did not develop.

Was the movie made solely to promote Muay Thai or is there some other intention behind it?

The film was made as an homage to Muay Thai, but more specifically, to my trainers and the other unknown boxers of Thailand. My intention was more to show the overall world and characters than tell a specific story.

Was the shooting process a challenging endeavour?

Yes, incredibly so. For instance, one of the challenges we faced was Brexit(!). It was announced the day we got back from our pre-production trip and the pound instantly plummeted by 20% and continued to fall. When we started, it was 54/55 THB/£ and it quickly dropped to about 37 and all our money was in pound sterling, so it wiped over 30% off our budget.

Having planned to simply produce, I ended up writing/producing/directing/acting/editing with most of it unfolding as we went all out in Thailand. While my Thai is quite proficient, it is definitely not fluent, making communication, directing, and organisation extremely challenging.

We also did everything on a tiny budget and frequently ran out of money. This was the hardest thing. Almost anything is possible when you have money. When you have little/none, even the simplest things can seem impossible.

What happened after the shooting?

We finished our main 6 week shoot and were well into the edit when we had a disaster with our hard drive and backup. We were told we lost 80% of the footage. It turned out that the hard drive company, Seagate, had a factory just outside the city. I connected with one of their people who pulled in some favours and they performed a miracle operation.

Did your friends help you out? Were there any professionals involved in the process?

Yes, some. There were many characters who appeared along the way.

My original filmmaking partner was a great support, he was the one who suggested that I should play the role (I always thought of Robert Pattinson to play it!) and he gave me the confidence for us to go solo and make it ourselves.

When he had left I was looking for a new camera operator when an old friend, Inbar Jeffery, randomly contact me to say she was in Bangkok. I went to visit her and she ended up coming back with me to visit Korat.

She had just left her job in the city, was at a cross roads and was looking for inspiration for a new career. She got interested in the project and one day, while at my trainers house, she picked up the camera and started filming. While she had zero camera experience, I could see that she had an eye for composition and storytelling. After a little more experimenting with the camera she came on board as our camera operator and also helped with general production and managing finances. She was instrumental in getting the first shoot off the ground.

We had a great producer in Korat called Beer, he helped as a fixer with everything local - casting, locations etc. My trainers were also great, particularly Cha, who knows almost everyone in Korat, so could organise anything.

During the edit, a guy called Jon Hammond appeared as if from the heavens. I was finishing the rough cut and needed to take things up a level, then I met Jon at a lunch in Bangkok. He is an experienced features editor and also teaches editing. He watched the film and then offered to re-schedule his holiday in order to come up and spend a week with me. He was brilliant and helped a lot.

Next came the sound. Shooting on location with limited resources meant sound was always challenging, lots of background noise - chickens, bikes, fighter jets, music etc. I connected with a guy called Niall Flynn, who lived in Korat and happened to have spent the last couple of decades as George Michael’s music producer. He was the wizard with all sound and music.

Again, I sent him the film and he offered to come on board and we spent months together in his home studio, cleaning the sound then working out sound design and score. He literally worked miracles.

Tell us a bit about the casting process.

Casting was quite natural at times. I was adamant that I wanted Kai’s character to be played by Khao (my trainer), he then suggested that Cha should get involve. Cha plays Chan, the older trainer.

Outside of that, we did a few casting calls, Beer helped a lot with this, finding us the promoter, the monk and so on.

Some of the locations look really beautiful. Did you do the scouting or perhaps you were already familiar with the locations?

I was already familiar with most of them; however, the main one - the old gym - only came about a couple of weeks before filming.

Cha called me up one day and asked if I wanted to go and see a gym near his house, not thinking about the film at all. We went and I fell in love with the place. I knew it needed to be featured.

I spoke to them about renting and renovating it and then re-wrote the story to integrate the old gym.

Did the final fight pose any logistical troubles for you and the crew?

The final fight was a real fight at a boxing event. The greatest challenge was that I was actually fighting and also sick on the day so, did not really have the mental capacity to be directing the production.

I was under the understanding that there would be 2 cameras, but it turned out there was only one, which meant that we did not have cutaways and we also could not clearly see the final knock out punch as the camera was behind me.

Is part two going to be the direct sequel to this film?

We are actually now planning to tell the story in 3 parts.

Being my first film with such limited resources, I initially decided to take the overall story and split it into 2 with the idea of making the first part as simply and cheaply as possible and using that to build momentum to complete the story with the next film.

Since then, the Cambodian story has come up, taken a life of its own and seems to have become a film in its own right.

So the idea is to shoot Part 2 this year in Cambodia before returning to Thailand to complete the story with Part 3, finally setting up a gym down on the islands.

We have an incredible location down there on a remote beach so it feels like the perfect ending to the story.

The movie premiered on December 7, 2019 in the United Kingdom. Please check below to see Asian Film Fans official review: