5 Lesser-Known Japanese Films Worth Your Time


Success in the film industry today is defined by numbers. It is defined by the first-day box office collection, amount grossed world-wide, or the number of small screens replaying it. However several popular and brilliant films were once absolute flops when released! Blade Runner 2049 and Fight Club - today quoted uniquely failed to garner enough traffic with the latter not even being able to recollect the amount it cost the make the film.

Japanese cinema is no stranger to such a phenomenon either. Being a commercial success certainly helps a movie to cross the border and reach out to the Western world, however, this way of measuring success by numbers has left several gems hidden. Here's a list of 5 such lesser-known movies certainly worth your time. We've picked from a variety of genres so everyone can find something of their choice.

An honest and diligent postman with the most boring lifestyle possible - suddenly finds himself sandwiched between the yakuza and the police. Hiroyuki Tanaka shone his best with this plotline - it is non-sensical in some places, impossibly convoluted in some, throws off shade and humour in equal measures and all of this comes packaged in witty dialogue. To fans of Tanaka, you might recognise some of his trademarks - parodies of existing scenes, highly ironic situations, contrasting shots placed one after the other.

Postman Blues is a parody of the gangster genre that has for ages taken itself too seriously. Tanaka is aware of this and treats the material as such, within a limited budget. The audience response was quite good, however, several critics felt the movie was complicated and disappointing. It never received a worldwide release except in some select countries.

If you're looking for a film that's both fun and intelligent - then settle down for Fish Story! Fish Story is a fun, impromptu wild ride that doesn't exhaust its box of surprises even after multiple viewings!

It all started in 2012. The world is about to end as a comet is approaching the Earth. However, in a small record store, the strange and eccentric man is busy lecturing everyone why they're perfectly safe. And it's all because of the song 'Fish Story' recorded in 1975. Cut to a number of highly improbably events, each with a different set of cast, each equally amusing and each tied together only by the strains of music. So, was the strange man right? Does the song really have something to do with saving the world? You'll have to watch this one find out. One thing's for sure - you won't be disappointed.

Brother was  Takeshi Kitano's first and only American co-production. It was extensively marketed and hailed to be the Japanese film that would break through to the US market. However, the movie bombed at the box office and Kitano never dared make another such bold move again. The movie also faced issues with the American release where several scenes had to be cut out before it received the green. Even after the initial release, the opinions of critics remained divided with some hailing it as elegantly composed and a step out of his usual comfort zone. Whereas others felt it was a standard film with nothing extra to offer.

Set in Los Angeles, Brother is the story of an exiled Yakuza enforcer who attempts to climb the social rank (of gangsters) again by steadily building his own clan. Kitano himself stated that the film was made to be a simple Yakuza film, targeted towards the then growing interest of Europeans towards this genre. With a fast-paced plot, well thought out action sequences, and the game of brotherhood where people can be mere pawns or kings, Brother is a great insight into the Japanese Yakuza community, set against a perhaps more familiar background.

Inspired by real-life events as dark as the movie itself, Owl is a classic tale of female predation that is still sadly unknown to many. Widespread starvation and dire straits after World War II left a mother and daughter on the brink of collapse. Rather than give in to starvation, they decide to offer themselves up as prostitutes to workers at a nearby dam site and then kill them to get their money. Things are fine until the trap spreads wider and soon a police officer is set to investigate this strange farming town. 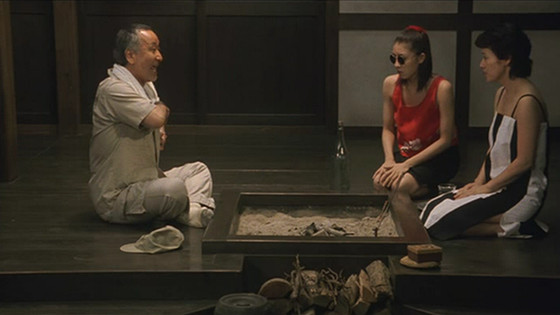 The film is many things - it a dark comedy set against sexual undercurrents, it is a commentary on post-war Japan, it is a vision of poverty rearing its ugly head. But what it certainly is not is something to be ignored! Shot almost entirely in a single place, the film is a lesson in minimalism and how an enticing and convoluted plot can keep anyone riveted to their seats.

Clocking in at nearly four hours, this movie is surely not for everyone. It is one of those films that cannot be defined or captured in a few lines. It deals with a wide range of topics from love to family to lust to religious cults. While at the heart of the movie resides a love triangle and 3 young people trying to find their way through life, defining it as such would be a very wrong depiction of all the richness it contains.

Sion Sono is known for his artful cinematography, layered plots and complex characters and Love Exposure is forever going to my personal favourite from his discography. With this movie, he does not care about creating a box office success (if the length of the film wasn't testament enough to that) but wants to trace the journey of Yū, Yoko and Koike. Don't let the length deter you, this is one exposure that everyone must have! With heavily adult themes, homosexuality and some kung-fu, this movie is an absolute feast for the eyes and heart.

That concludes this list of lesser-known, but amazing Japanese films. Know more that should be on the list? Let us know in the comments below!