With a stellar cast and strong concept, #Alive starts out with every intention of breaking away from the genre's moulds. Ah-In Yoo, who was brilliant in Burning, and Park Shin-Hye (shedding her innocent image from Pinnochio to become a machete-wielding badass) portray the only two human survivors...
Written by Nayanika 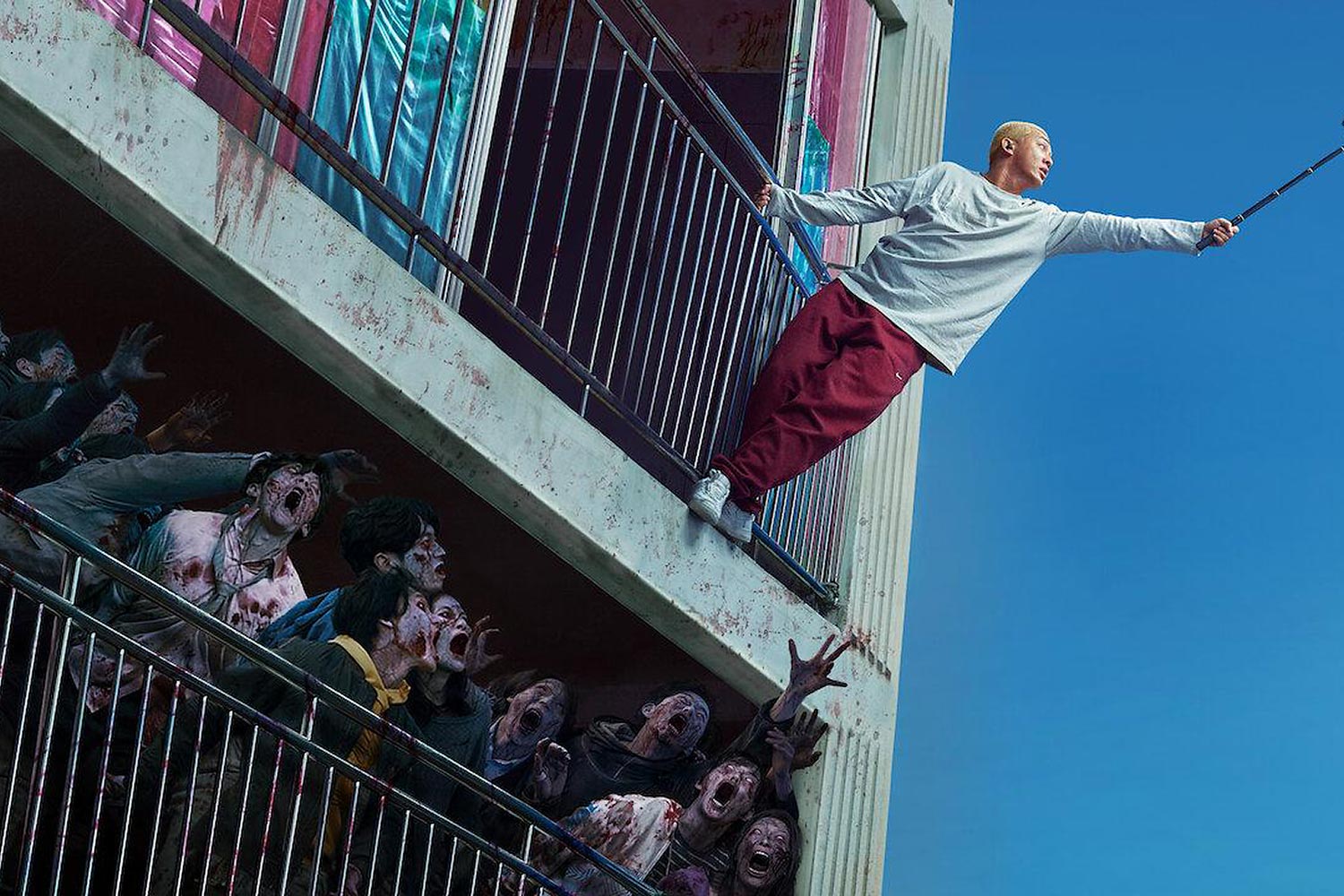 With a stellar cast and strong concept, #Alive starts out with every intention of breaking away from the genre's moulds. Ah-In Yoo, who was brilliant in Burning, and Park Shin-Hye (shedding her innocent image from Pinnochio to become a machete-wielding badass) portray the only two human survivors left behind in a high rise-, high-density apartment complex overrun by zombies.

The story bears a sharp resemblance to an arc in the book World War Z by Max Brooks (also made into a movie that hardly bears any resemblance to the original). In the book, there runs a story of Kondo Tatsumi - a gamer in Japan who was also stuck in his apartment during the Zombie apocalypse. Tatsumi states several facts that hindered his survival. The first was finding weapons in the home of the average Japanese. He explicitly asks the interviewer, "Which salaried man conducts his own home repairs?" Even coming across a hammer seemed impossible. The second was the reliance on technology for the average city dweller.

Canned food and bottled water may make life easier but an analyst or an HR manager living in the city has very few survival skills that would be of use in a post-apocalyptic world. Golf clubs, he stated jokingly, were not an ideal choice at all to bash in a zombie's head. The ability to not grow their own food, or source their own water put apartments at a risk as compared to rural houses.

The movie begins with Jun-woo waking up to find his parents gone. When he looks down from his apartment's balcony, all he sees is pandemonium. We're introduced to a series of things that define Jun-woo in rapid sequences - he is an avid gamer, a live streamer, he is tech-savvy, has more than one drone at home, and like every rebellious teenager - he did not buy as much food from the supermarket as his mother had asked.

Director Cho Il-Hyung, it seems has taken inspiration from several such sources including the French film "The Night Ate the World". Along with that, he has added the fears of the modern-day crowd. Tightly spaces apartments that are sold only the basis of the utilities provided below - utilities that are now rendered inaccessible. The loss of cellphone signal - imagine being cut off from the entire world! And the cutting off of running water and electricity.

In the opening sequence, there are several architectural shots, panning across rows and rows of symmetrical windows. Each window houses an individual soul - a person with their own story and thoughts. Rising land prices have driven city housing to be little more than a series of same, machine-cut layouts. A window is now just a glass-framed window. In situations like the zombie apocalypse (or say COVID-19?), these turn into death-traps. We often think of zombies as mindless, non-individual creatures. There is no defining factor that separates one zombie from another. Can the same be said as you look at each window? Are humans still individual? As the camera pans across the rows of steel balconies, it is difficult to imagine so.

Being born and bred in the city and never having to deal with a massive power shutdown, Jun-woo does not think of several things that could have happened - like the shutting down of the water supply. He had not counted on things like charging his phone or worrying about the network. Which makes sense once you know that South Korea has the fastest average internet connection speed in the world. There are several moments that might make an average person go, "You should have thought of this!" but for a millennial living in a first-world county - how would he ever have known that one day he might not be able to go online anymore?

The movie is surprisingly self-aware and knows the direction it wants to take. Unlike most zombie movies where the characters find themselves travelling across the landscape, the entirety of #Alive is set in one cramped apartment complex. Jun-woo hardly leaves his apartment until almost three-quarters of the film is done.

While failing to cope up with the stress of living alone, he returns back to playing video games despite zombies growling right outside his door. The reliance on technology to escape daily life may make the older generation facepalm but keeps Jun-woo sane for the time being. When the Government issues an announcement stating that those with mobile phones can connect to a radio channel dispensing information by using traditional earphones as an antenna, he scurries around only to find a variety of new-age wireless earphones with no jack.

But if technology set him back a few times, it saved him more often than that. When he comes to know of another survivor living across the parking lot, they use drones to deliver food to one another and create a ropeway between their balconies. He also uses the drone and his phone camera to survey the entire neighbourhood. When he posts his situation on social media, it leads to several others doing the same. And the military uses these to track down neighbourhoods where people are still alive - hidden away in similar apartments.

A tender moment arises when Jun-woo and Kim Yoo-bin share their numbers and then share ramen with one another over a video call while still in their respective apartments. However, this introduction and intertwining of technology end once the power lines are shut down. From here on, #Alive takes on a drastic turn to embody every generic zombie-flick ever. There are several counts on which the script fails entirely.

The first is in defining the zombies.

Yes, you might wonder how zombies can be defined. But each zombie flick has had a particular take on them. World War Z introduced us to fast zombies. Fallout introduced us to radioactive zombies. In each movie, the intellect and limitations of these creatures are clearly stated or discovered eventually. World War Z zombies would not attack a sick person. Zombies in Train to Busan were heavily reliant on sight. Walking Dead zombies were attracted by sound and relied heavily on smell to distinguish humans. 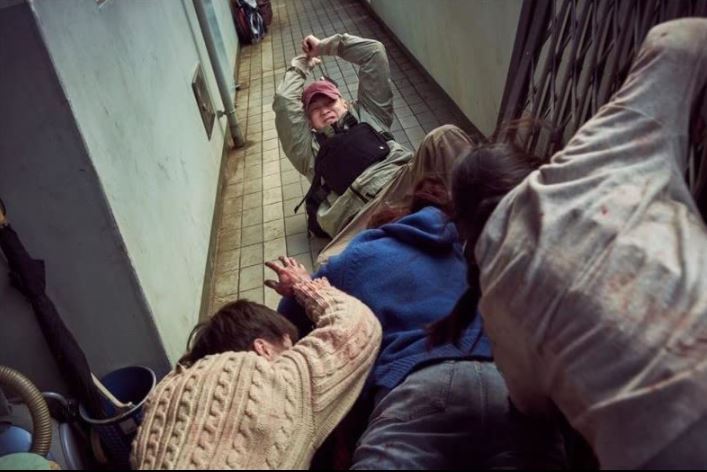 In virtually all cases, they are shown to have almost no brain function other than the desire to eat. #Alive tethers in between. The zombies are attracted by sound. They're sometimes smart enough to hear a noise from the parking lot below and identify the exact apartment it is coming from (Even a human can't do that!). Sometimes, they are distracted by a single telephone ring, or a drone flying near their heads. At other times, they completely miss Jun-woo standing silently right behind them.

The second half of the movie also makes use of the common trope that in case of an apocalypse - people are just as much a threat as zombies. And it does not do it well. Whatever comes #alive between Jun-woo and Kim Yoo-bin as they share a meal, is also not unexpected but certainly decreases the freshness this movie started out with. Despite all this, #Alive opened with huge box-office success and had the highest number of views for any movie released since February 2020 in South Korea.

What Director Cho Il-Hyung started out with was a vision. And possibly a new sub-set in the genre of zombie films. However, #Alive could have been a larger cultural reset than the minor breakthrough that it was, had not the director succumbed to the traditional notions of what makes a zombie film click.

Check out the trailer below and let us know what you think!