5 South Korean Zombie Movies We Recommend For Your Next Watch

Has 'All of us are dead" left you wanting more of Korean zombies? We are here to help out!
Category Features
Author Rubab Shahbaz

The new hit Netflix series “All of us are dead” just further proves our point that no one does Zombies better than the South Korean entertainment industry. So whether you are just a fan of the genre or got hooked on “All of us are dead” and are now craving the taste of South Korean zombies (sorry for the pun) we got you! Here are 5 Zombie films we recommend as your next watch: 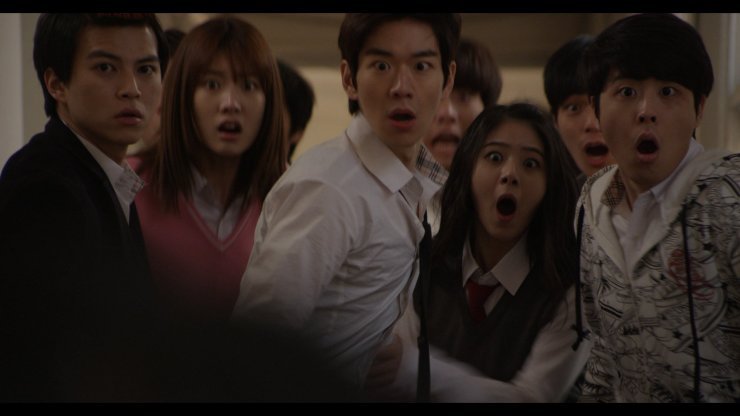 We will start with Zombie School. If you are looking for a title similar to "All of us are dead", this should definitely be your pick. Zombie school is also set in a high school setting, but this is a school for troubled (read criminal) teenagers. One of the teachers is bitten by an infected animal( a zombie pig to be precise) and turns into a flesh devouring Zombie. Slowly all teachers are infected and turned into zombies. The movie follows the students' struggle to fight off their teachers and escape from the school alive (I know sounds like just another regular day of school, right?). 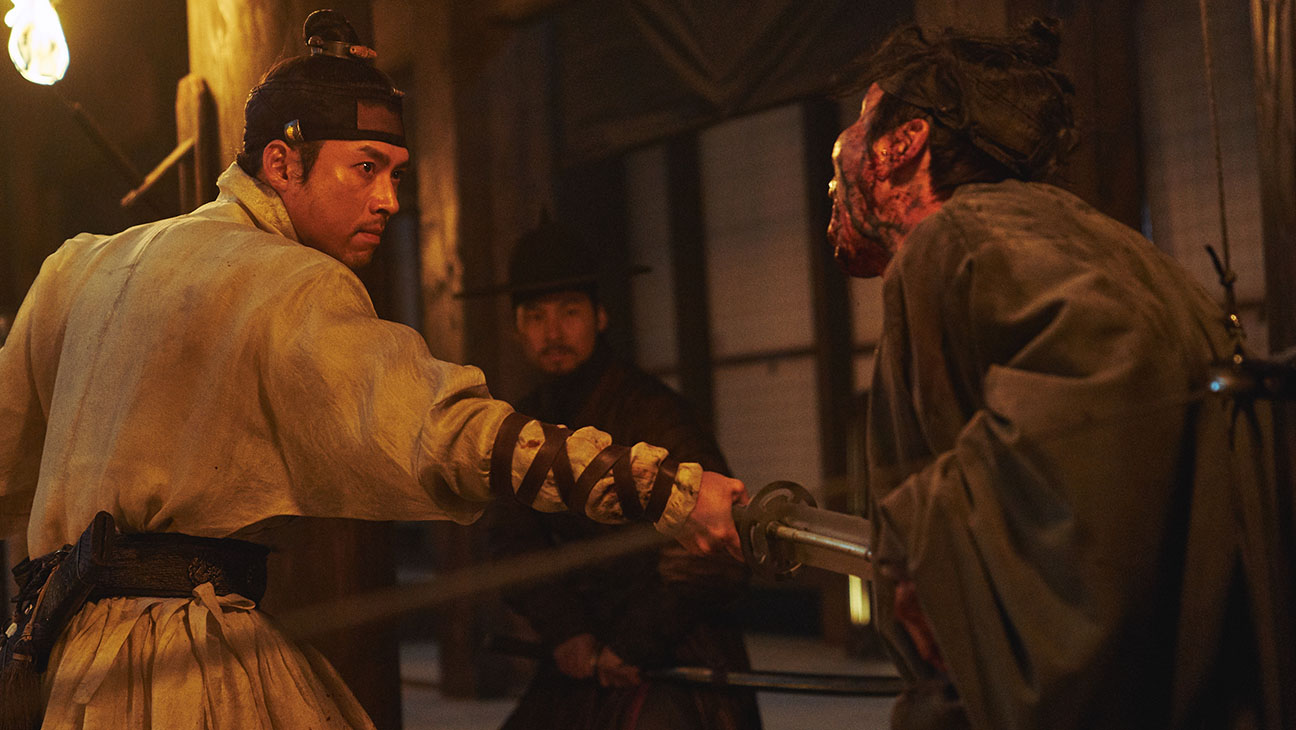 If you are bored of the usual run-of-the-mill zombie apocalypse with the leads killing the hordes of Zombies with machine guns then we recommend you watch Rampant.  Rampant is a... Wait for it.. a period zombie action film! (For those of you who don't know, a period movie or drama is one set in a specific time of history depicted through period-relevant costumes, sets, and props.) That's right, Rampant is a movie where we are fighting off zombies with old-school sword fighting!

Set some time in the Joosen dynasty, Rampant revolves around the exiled prince Lee Chung and war minister Kim Ja-joon. As it happens a plague is infecting the nation and turning people into zombies. Kim Ja-joon wants to use this plague to overthrow the King and his court. Prince Lee Chung wants to save his people and his dynasty.

The film is directed by Kim Sung-hoon and stars Hyun Bin and Jang Dong-gun in the main roles. The film was released on October 25, 2018. It, unfortunately, did not do too well at the box office but we still suggest you watch it for the zombies and the sword fights. 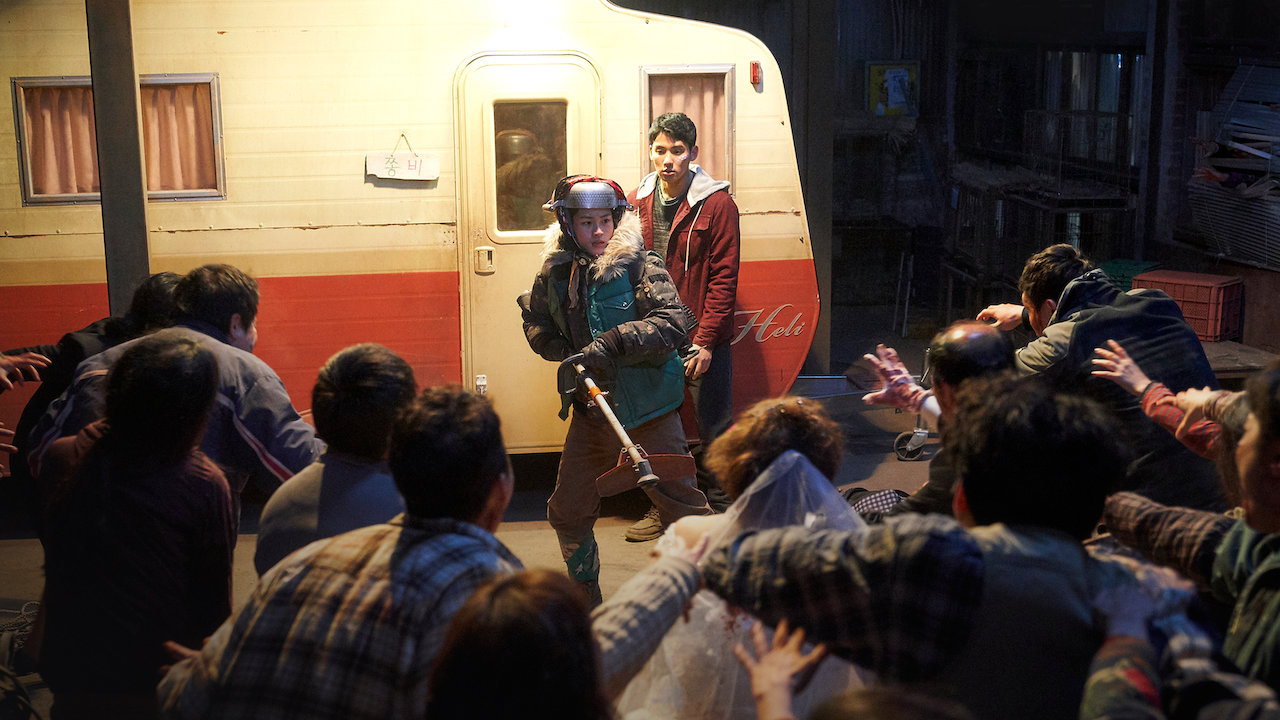 Ok, this one is a little different. The Odd Family: Zombie on Sale is a Zombie comedy movie. And it is fantastic.

So a pharma company has made a virus, experimented on humans and now we have zombies. The pharma company denies the allegations but one of the zombies escapes and ends up in a remote village. Now see, a hoard of zombies trying to kill you is scary. One guy, who looks half dead, can't walk or talk properly and is constantly trying to bite you is more of a nuisance than an actual threat. Eventually, he does manage to bite someone. However, instead of turning into a zombie, that guy turns about 30 years younger. Now everyone wants the zombie to bite them and in a parody of usual zombie movies, where zombies chase humans, people are lining up to be bitten by this zombie to get their youth back. However, giving back their youth isn't all that this virus does.

The movie is directed by Lee Min-jae and the cast of the movie includes veteran actors like Kim Nam-gil , Jung Ga-ram, Lee Soo-kyung , Jung Jae-young and Park In-hwan. #Alive is about two survivors of the zombie apocalypse who are trapped inside their flats in opposite buildings. The city outside is being run down by zombies and we see the characters slowly losing hope to survive as their supplies run out. Can they both make it to a safe place? IS there any such place left?

#Alive is a great horror movie with right amount of gore, special effects, good story and great performances. The movie was directed by Cho Il-Hyung and was released in September 2020 in both cinema and the streaming platform Netflix . It is based on a script by Matt Naylor by the name of Alone ( which was also adapted into an American film by the name of Alone directed by Johnny Martin) The movie stars  Yoo Ah-in and Park Shin-hye in the lead roles.

#Alive surpassed 1 million ticket sales on 5th day of its release in cinema. On Netflix #Alive became the first Korean film to top Netflix Movies Worldwide charts. It also topped daily rankings in 35 counties including USA, Russia, Australia, Pakistan, and Canada. By Dec 2020, #Alive was in the top 10 list in 90 countries. Train to Busan has been hands down the GOLD standard of Zombie movies ever since its release in 2016. And it deserves to be. The movie is a masterpiece in every aspect be it the story, the acting or the visual effects. It is scary, it is gory, and it is one of those movies which makes its audience go through an emotional roller-coaster and leaves them feeling devastated and empty.

The movie follows struggles of a father, Sok-woo, trying to save his daughter in an sudden outbreak of a Zombie pandemic. Sok-woo was taking his daughter, Su-an, to meet her mother in Busan for her birthday. Unknown to them a virus is spreading in the city turning people into zombies. An infected person somehow gets into the train and now all passengers are in danger. Can they reach Busan safely?

Train to Busan was the highest-grossing domestic film of the year 2016 in South Korea. Made with a budget of $8.5 million, the movie made $98.5 million worldwide. It also set the record for the first Korean film of 2016 to break the record of over 10 million tickets sale.

Train to Busan was followed by an animated prequel, Seoul Station, which was released less than a month after the release of original film. The animated film was also directed by Yeon Sang-ho. It shows the origin and spread of the Zombie virus before the events of Train to Busan takes place.

Peninsula released in 2020 is a (spiritual) sequel to Train to Busan, set four years after the events of the original movie. The movie is also written and directed by Yeon Sang-ho and stars Gang Dong-Won, Lee Jung-Hyun, Koo Kyo-hwan and Kwon Hae-hyo.