Cult Korean Sci-Fi Film 'Save The Green Planet' is getting a US Remake : Here is all you need to know


The sci-fi crime thriller Save the Green Planet! (지구를 지켜라!) that won the Golden Raven Award at the Brussels International Fantastic Film Festival, and few other local and international awards will get a Hollywood remake according to the online news site Deadline.

According to Deadline, the original director, Jang Joon-Hwan, will be in charge again to direct the English adaptation of this classic cult film. He is also known for his other films such as Hwayi: A Monster Boy (2013) and the politically-charged historical drama titled 1987: When the Day Comes (2017).

Award Winning - Yet Failed At The Korean Box Office

To refresh your memory, Save the Green Planet! was initially released on April 4th, 2003. It didn't do well at the Korean box office initially; however, it became a hit at the international film festival circuits. Hence, it became a cult favourite and earned international awards such as Golden Raven award at Brussels International Fantastic Film Festival (2004), and the ADF Cinematography Award at Buenos Aires International Festival of Independent Cinema (2004) and Hwang Jung-min won the Best Actress at the same festival.

While it's director, Jang Joon-Hwan, won the Silver Saint George award for best director in the 25th Moscow International Film Festival (2003) and then won the Golden Bell award for the best new director in Korea (2004).

The film's poster and trailer may mislead you to think that this is a comedic misadventure of a paranoid young man, but that's not the case. 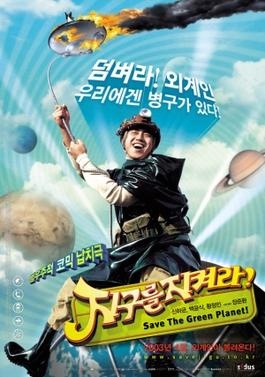 The story is about a paranoid and drugged up beekeeper named Byun-Gu, who believes that he can save the world from an alien invasion. So, with the help of his girlfriend, Sooni, they abducted a CEO, Man-Sik, who he believes is an alien from the planet of Andromeda and is secretly hiding his true identity as a leader of these aliens.

He believes that to save the earth, he needs to convince Man-Sik to contact the "Royal Prince" and persuade him to call off their plans, so he systematically tortures him in his basement to find the truth.

The story might be a bit all over the place, and it will be hard to describe it to people who haven't seen it yet as the film starts a bit serious but also a bit comedic then eventually turned into something very dark and violent at times. Still, it is a brilliant deep emotional story that combines comedy, drama, thriller, suspense, horror, science-fiction with truly amazing results.

CJ Entertainment, the same studio that brought us the film Parasite, will work with Ari Aster, writer and director of Hereditary (2018) and folk horror film Midsommar (2019) and his partner Lars Knudsen as producers under their Square Peg Production banner.

The CJ Entertainment head of the U.S. Productions Francis Chung will also be the producer,  while CJ Group vice chairwoman Miky Lee, CJ ENM's Young-ki Cho, and Jerry Ko will act as executive producers. The script will be written by Will Tracy, who also wrote for the HBO drama "Succession" and will try to translate what made the original so unique and relevant to what's going on today, according to Miky Lee.

The film is part of the growing number of Korean movies getting an English adaptation from CJ Entertainment following other films that are in development, such as Sunny (2011) and Extreme Job (2019); however, there is no news about the release date, but you can read the full article from Deadline here: [LINK]